The three-time Indianapolis 500 Champion race car driver Bobby Unser had many things to say as he sat in the passenger seat of the car during Curtis' recent blindfolded car drive.  "This is the DAMNEDEST thing I've EVER SEEN!" he said as Curtis raced around the parking lot and down the roads of the side of the mountain at the Whitney Mountain Lodge in Garfield, Arkansas on October 6th, 2014.  "In all of my years of driving, I've never seen ANYTHING like this!" he continued.

Curtis entertained a small group of about 30 people that afternoon, among which were a few other notable people: Don Schmaltz, who was one of the original Marlboro men, and Lou Skelton, one of the original 8 men under Sam Walton in the founding of Wal-Mart.  Curtis performed an hour-long show in one of the dining areas of the lodge; a beautiful, neatly tucked away lodge that is perched some 700 feet above Beaver Lake, with stunningly gorgeous views.  For more information about this well-kept secret get-away, visit their website at www.WhitneyMountainLodge.com.  After loads of amazement, genuine laughter and a standing ovation, the show finished by bringing everyone outside to watch Curtis take the famous Indy race car driver for a ride he would never forget.

The stunt began with the car being pulled up to the entrance of the lodge as the crowd gathered and Curtis explained what was about to happen.  Curtis displayed two large, American silver dollar coins and a large, brand-new roll of black duct tape.  Bobby examined both the coins and the duct tape to make sure there were no holes drilled in the coins (and that they were solid, genuine coins) or pinholes or such like poked in the pieces of duct tape.  He verified that none of these things had been tampered with in any way and that nothing had been prearranged with him prior to the stunt.  Curtis also borrowed a car from one of the people attending the party, and had not even driven the car or seen it prior to the stunt.  No electronic devices of any kind were being employed as well.  Other people who organized the party verified this. 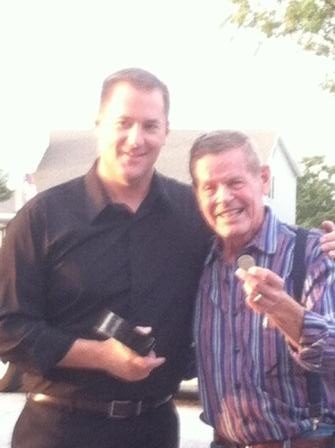 A Blindfold Made of Gorilla Tape

Curtis then tore off several pieces of duct tape, each approximately 12 inches long.  Bobby placed one of the coins into the center of one of the pieces of tape and assisted Curtis in placing the tape over Curtis' right eye, with the large coin fitting directly over Curtis' eye socket, covering the socket completely.  The same was repeated with Curtis' left eye.  Bobby also made sure to press down and seal the tape entirely around the bridge of Curtis' nose and edges, so that no light could get in and to prevent any gaps in the tape.  Bobby then sealed the outer edges of the tape with more pieces of tape, ensuring that any peripheral vision that Curtis may have was cut-off as well.  He then finished by placing yet another piece of tape horizontally and directly across both of Curtis' eyes and the bridge of his nose, sealing it across the nose with his fingers.

Taking things even further, and as a final gesture, Curtis grabbed the roll of tape and wrapped it in a circular fashion around his head and over his eyes repeatedly, adding layer upon layer of tape not only over his eyes, but in his hair as well.  The crowd began to groan and holler loudly, imagining how painful it was going to be to remove that tape once the stunt was over.  As Curtis demonstrated later, they were absolutely correct. 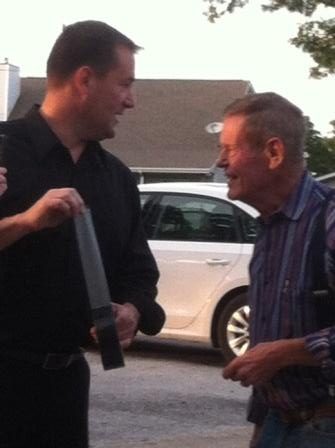 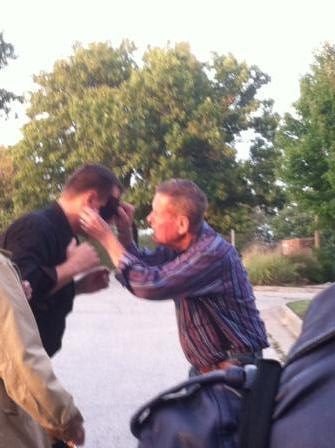 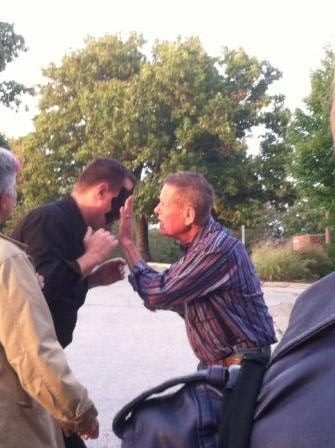 Bobby Unser Escorts Curtis To The Car After He is Blindfolded

Once the blindfold was verified and completely intact, Curtis held up his hands as to not touch or tamper with the blindfold as Bobby and others helped him walk to the car and enter in to the driver's side to be seated.  Once inside, Curtis was so unfamiliar with the car that he couldn't find the gear shift.  Bobby had to help him find even that!

Once Curtis and Bobby were safely buckled in, two ladies (friends of Bobby's who were very brave and just had to see his reactions first-hand) jumped in the backseat to join in the fun.  Neither of them were in on the stunt or accomplices of any kind.  Once the area in front of the car was safe and clear, Curtis placed the car into "Drive" and stomped on the gas, launching the car off at a ridiculous rate of speed, as the outside crowd began to yell and holler in astonishment. 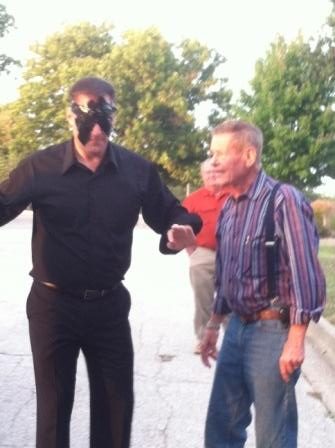 Curtis Speeds Off, Dodging Curbs and Trees at a High Rate of Speed

Curtis sped around the parking area, dodging curbs and trees at a rate of speed even the famed Indy driver found incredible.  In less than a minute they were pulling up once again in front of the lodge where they began, only for Curtis to continue speeding by in an apparent attempt to make another lap.  However, as he was about halfway around the parking area once again, he veered off to the left and shot straight down a steep road that wound it's way down the side of the mountain and took them through a small residential area.  Along the way, Curtis managed to avoid several ditches, mailboxes, a large male deer, and even a lady out walking her dog!  When they arrived near the bottom of the hill, Bobby talked Curtis through a three-point turn around, and they sped right back up to the top of the hill.

Curtis Returns The Champion Back Safely

Curtis managed to pull the car back safely in front of the lodge, and a couple of people assisted him in getting out of the car and stepping up onto the curb and into the grass.  There, as people gathered around, he slowly removed the duct tape blindfold, wincing as the tape peeled itself from his face and hair, causing pain to both Curtis as well as those standing by!

The drive was a smashing success, and Curtis was thrilled to be a wonderful part of a long-time yearly meeting of friends. "I figured that you have scared the crap out of so many people over the years with your crazy driving that it was about time you had some sort of pay back!" said Marvin Autry, Curtis' client and the owner of Midwest Corporate Aviation.  He is also a long-time friend of Unser.  "Are you ever going to forget this?"

"Absolutely NOT!" Unser said.  "This is the DAMNEDEST thing I've ever seen in my LIFE!" 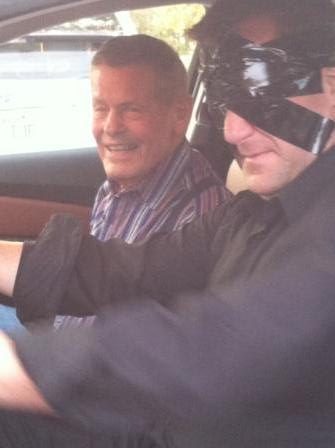 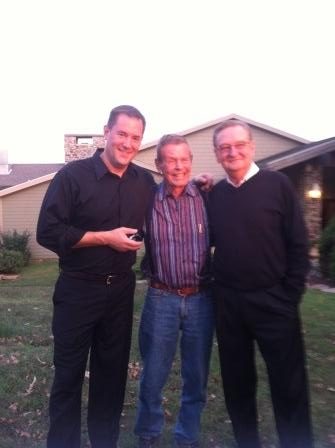 Scroll Down To Inquire About Curtis Performing A Publicity Stunt or Special Entertainment for Your Event!