To see the full Wichita Eagle story, visit the story about Curtis The Mentalist’s blindfolded car drive at Blacktop Nationals by clicking here.

Curtis spent a few minutes on-live radio before the stunt on Wichita’s BRAND-NEW 99.7 Lite FM’s “The Brett Harris in the Morning Show” with Brett Harris and former “News Goddess” Anita Cochran.  Curtis demonstrated his “remote vision” ability live on-air.  Brett tested two blindfolds before Curtis donned them and Curtis was still able to tell Anita what objects she was staring at in the room by “seeing through her eyes.”  In this case the object happened to be the pair of scissors Anita is brandishing in the photo below. 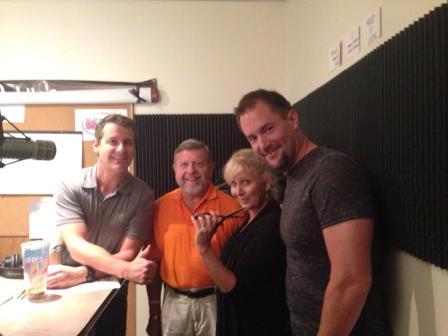 “If he nails this, I’m going to freak out!”–Brett Harris

The stunt was video taped live for an upcoming episode of the PBS show “Street Rodding American Style” with David Wolfe.  The episode will air sometime later in the fall of 2013.